Spiders are famous for their ominous appearance, ability to bite-often with venom, their webs and their predacious nature. Different than insects, which have six legs, spiders have eight legs and their thoraxes and heads are “fused” into a “cephalothorax.”  The eight legs and body type make them “arachnids,” and not insects.  They have fangs and inject venom—though, thankfully, most spiders are too small to penetrate human skin.  And spiders are able to produce silk.

Spiders vary widely in size, “personality,” and presence or type of webbing they produce. Fortunately, Black Widow and Brown Recluse spiders are not native to Western Washington and are only rarely transported here.

Unfortunately, we do have House Spiders (also known as the Hobo Spider) which produce a skin ulcer and various other symptoms.

Of course, spider webs cause a great deal of aesthetic concern, covering areas of home exteriors, window views, and indoor areas of walls and ceilings.  Here, spider’s silk becomes a messy, unsightly problem.  Homes and commercial buildings near waterfronts are especially susceptible to spider webs obscuring the view.  Waterfronts have abundant aquatic flies and midges which spiders love to hunt so local spider populations are huge. 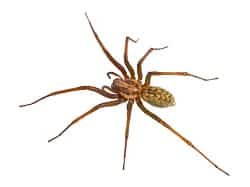 The house spider or hobo spider is rather large, about 2/3” in length, and responsible for our worse spider bite injuries in Western Washington. These spiders can be found in many locations in and around a home, they travel long distances and are swift runners. Their bite is not too painful, but the symptoms that follow can be severe.

Within a half-hour a red swelling occurs that can be 2 to 6 inches across. Within 1 to 2 days this area blisters and breaks, creating an open ulcer which can require surgery. Healing of the ulcer can take months. Systemic illness, when it occurs, can include headache, nausea, weakness, and vision impairment. Brown Recluse Spiders are not normally found in the Northwest. According to arachnicologist, Rick Vetter, there have only been 3 documented cases of Brown Recluse Spiders in Washington State.  They are particularly feared because they venom is necrotic—meaning it kills cell tissues.  Others, similar-loving spiders do exist in the Northwest, but they don’t have the horrible consequences.

Black widow spiders are famous for their appearance and their bites.  Black Widow spiders, while relatively small, have a very powerful neurotoxin in their venom.  Black widow spiders are famous for their striking coloring, sexual cannibalism, and the history of people being bit by them.  Black widows are actually reluctant to bite and will play dead first, and only bite when threatened and cannot escape.  Bites from the black widow cause the typical local pain and swelling, but also may result in headache, sweating, increased blood pressure, strong muscle cramps and/or intense chest pain, tightness and difficulty breathing. What you can do to avoid spider infestations—Seattle, Tacoma, and Bellingham.

Homeowners and property managers of commercial buildings can do much to avoid spider infestations.

Cascade Pest Control provides both ‘spider knockdown’ treatments and ongoing preventive spider control treatments to limit, or even stop, spiders from invading a home.  Cascade’s ‘spider knockdown’ treatment is most often used as an initial treatment to commence long-term spider control and protection from spider infestations.  The spider treatments consist of a combination of spot application of a spider spray in strategic locations and the use of a spider pole to whisk off webs—both discouraging their habitat and leaving the spiders more vulnerable to our low-toxic spray.  Your technician will advise you should landscape or other items provide spider habitat.